So as of late I found the Openmoco project. This project is full of people in videography and photography, as well as quite a few DIY'ers that create Motion Control devices. One of the popular things that they talk about and create are motorized pan and tilt devices for cameras.

I have been experimenting with time lapse photography, and quite like doing it. It lends a new perspective to how short time actually is.

Upon further search, some of these pan and tilt devices are used for time lapse photography (one of the popular devices is the Emotimo TB3). With them, you can create shots such as this -


It was the light from Jeff Morris on Vimeo.


I thought that being able to make those kinds of shots would be... awesome. Unfortunately, there were a couple drawbacks to the Emotimo TB3 (the only thing within my price range)

1. I couldn't use it for gigapixel photography (due to nodal point issues)
2. I (as a student) could not afford it.
3. It probably wouldn't be able to do real-time video very well due to the large gearing reductions.

So I set out to build my own.
One of the designs I found to be very helpful was Steven Brace's pan and tilt device, made from acrylic (stevenbrace.co.uk)

Well, the first time I tried building it using laser cut acrylic pieces and acrylic glue. As soon as I tightened the bolt with the gear, the acrylic cracked. Not good.

After that design was thrown out, I decided to base it more off the Emotimo TB3, using machined aluminum. I realized this was not going to work and also scrapped that idea.

This is where I am today, with machined aluminum struts that are bent into an L shape. 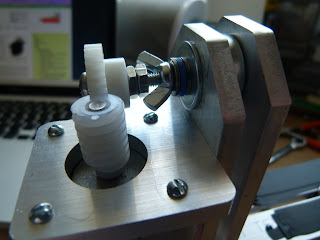 This design, while still being my best so far, still has flaws, so I have decided to work on the (possibly) final design on this. Most of the major changes involve shaft diameter (my #10-32 shaft bends to easily and leads to gear slipping), as well as creating 2 plates for each "L" strut that screw together rather than my current design which is bent into shape. Any other things I can do also, such as quieting and reducing motor buzz and vibration, are being thought on also (but any ideas on this would be appreciated).

So still a ways to go, but hopefully v5 of this project will be my final design!

Here are 2 shots of the design in movement, one of the robot itself, and another from the camera view.